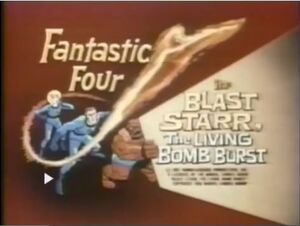 Appearing in "Blastaar, the Living Bomburst"

Synopsis for "Blastaar, the Living Bomburst"

Reed uses his time-space dimension machine to observe a strange distant planet in the midst of a giant battle. The planet's inhabitants are fighting Blast Starr, an incredibly powerful being capable of throwing power bolts from his hands. He is eventually defeated using a special gas and exiled to outer space in a capsule suit. Reed uses his machine to enter the Negative Zone and look closer at the planet, but ends up trapped there with no return. He asks Johnny to follow him to halt his journey through space, and with his help, Reed is returned to Earth, along with Blast Starr, who escapes from his capsule suit. On Earth, Blast Starr begins destroying everything in sight, and the Four attempt to stop him. They trick him into believing that he has destroyed them, and then lure him to an atomic power plant on Atlantis island where the final battle takes place.

Like this? Let us know!
Retrieved from "https://marvel.fandom.com/wiki/Fantastic_Four_(1967_animated_series)_Season_1_17?oldid=6501544"
Community content is available under CC-BY-SA unless otherwise noted.