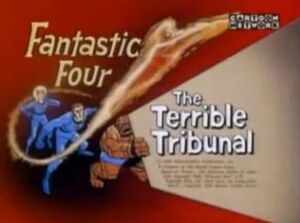 Appearing in "The Terrible Tribunal"

Synopsis for "The Terrible Tribunal"

An alien ship from deep space approaches Earth and abducts the Fantastic Four. The robotic crew take the super-team to their world, where Reed is informed that he and the rest of the Four are being charged with crimes against evil, with the team's accusers being Klaws, Molecule Man, and Blastaar. The Court of Evil observes Reed's own memories of the team's battles against Klaw, Molecule Man, and Blastaar, while the rest of the team escape their confinement. Reed is judged guilty and sentenced to disintegration, but Ben, Johnny and Sue rescue him. The Four then have to face the three super-villains in addition to the planet's evil judge and robot army.

Like this? Let us know!
Retrieved from "https://marvel.fandom.com/wiki/Fantastic_Four_(1967_animated_series)_Season_1_18?oldid=6501545"
Community content is available under CC-BY-SA unless otherwise noted.