"Menace of the Mole Men" 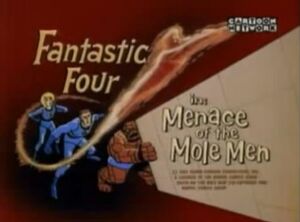 Appearing in "Menace of the Mole Men"

Synopsis for "Menace of the Mole Men"

Ben is helping Reed to test out Sue's new force field, when they start receiving complaints from the Baxter Building's other tenants. Reed decides to take the team's tests to an isolated island that he was alerted to by a leaflet mailed to him. When the Four get to the island, the team is stranded there when their U-Car is stolen. They then run into the Mole Man, the ruler of Subterranea, who tells them that he has rebuilt his underground network of tunnels leading to every capital city. He intends to take over the world's governments, and to accomplish this, imprisons each of the Four in a series of traps. The Four have to escape their confinement and prevent the Mole Man from taking over the world.

Retrieved from "https://marvel.fandom.com/wiki/Fantastic_Four_(1967_animated_series)_Season_1_2?oldid=5224258"
Community content is available under CC-BY-SA unless otherwise noted.