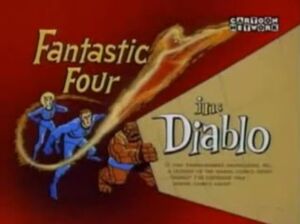 The Fantastic Four are lost in a Transylvanian forest while on vacation, and eventually come across an old castle. They are warned that the castle belongs to Diablo, an evil alchemist was was sealed away in the dungeon exactly 100 years ago. Only a very strong individual can free him, and so Diablo hypnotises Ben into breaking the seal that holds him. The rest of the team investigate Ben's disappearance, and find that Diablo has rewarded Ben by partially returning him to his human form. In return for Diablo's help, Ben agrees to act as the alchemist's assistant for one year, against the team's objections. Reed steals a sample of Diablo's serum that changed Ben, while Diablo performs miracles all over the world with his other potions. Reed discovers that Diablo's potions are dangerous, while Diablo himself amasses an army. Ben eventually fully returns to his Thing form and breaks Diablo's hold over him. As Diablo's potions all over the world begin to wear off quickly, the rest of the team head to his castle to stop the alchemist and free Ben.

Retrieved from "https://marvel.fandom.com/wiki/Fantastic_Four_(1967_animated_series)_Season_1_3?oldid=5224257"
Community content is available under CC-BY-SA unless otherwise noted.