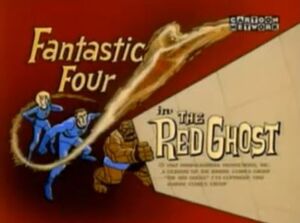 Appearing in "The Red Ghost"

Synopsis for "The Red Ghost"

Reed experiments on a meteor for use as a new super fuel, but with little success. He got the idea from a scientist named Professor Ivan Kragoff, and so the Four endeavor to use the fuel to get to the Moon, winning the space race with Kragoff, and to explore a mysterious blue area on the Moon's surface. Kragoff himself, known as the Red Ghost, uses a trio of intelligent apes to assist him in his rocketship. Both ships take off at the same time, and the Red Ghost's ship is bombarded with cosmic rays, giving him and his apes superpowers. In the Moon's blue area, the team find an ancient deserted city, and come under attack from the Red Ghost and his super apes. Sue is taken hostage, and Reed, Ben and Johnny follow the Red Ghost for the final battle.

Retrieved from "https://marvel.fandom.com/wiki/Fantastic_Four_(1967_animated_series)_Season_1_4?oldid=5224259"
Community content is available under CC-BY-SA unless otherwise noted.