"Invasion of the Super Skrulls" 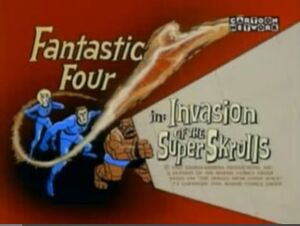 Appearing in "Invasion of the Super Skrulls"

Synopsis for "Invasion of the Super Skrulls"

On the Skrull homeworld, the Skrull emperor attempts to destroy the Fantastic Four, but Sue protects them with her invisible shield. Marshall Drom then shows the emperor a new weapon that will not fail: the Super Skrull, who has all the powers of the Fantastic Four. He is sent to Earth, where he quickly comes into contact with the super-hero team in New York. After claiming the Earth in the name of the Skrull Empire, Super Skrull and the Fantastic Four battle each other, but are too evenly matched. The Four then retreat back to the Baxter Building, where Reed discovers that Super Skrulls powers are being beamed to him from the Skrull homeworld. Reed creates a jamming device, and after inviting Super Skull to fight the team on Crater Island, Sue has to attach the jammer to Super Skrull before the rest of the team can stop him.

Retrieved from "https://marvel.fandom.com/wiki/Fantastic_Four_(1967_animated_series)_Season_1_5?oldid=5224260"
Community content is available under CC-BY-SA unless otherwise noted.