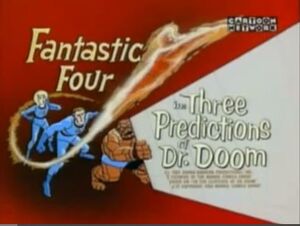 Dr. Doom appears on the Fantastic Four's Television, and challenges them to a duel to the finish. He predicts that he will remove the heart of the team, remove the team's greatest strength and finally, that the strongest power will conquer all. As Sue takes part in a photo shoot, Doom kidnaps her and takes her to his base, thus removing the team's heart. The rest of the team take part in a conference at the U.N., where Doom announces that he will destroy every major city on Earth with tidal waves unless he is voted world ruler. He demonstrates his power on an abandoned navy yard, and tells the team not to stop his plans as he has Sue. Reed tracks down Doom's airship, and the team go there to rescue Sue. On board, Doom attacks them with a cosmic ray gun, and turns Ben back to his human form, removing the team's greatest strength. Ben sacrifices his humanity, becoming the Thing again, and sets forth to rescue the rest of the team, evade Doom's booby traps and prevent the super-villain's plan from succeeding.

Retrieved from "https://marvel.fandom.com/wiki/Fantastic_Four_(1967_animated_series)_Season_1_6?oldid=5224261"
Community content is available under CC-BY-SA unless otherwise noted.