"The Way It All Began" 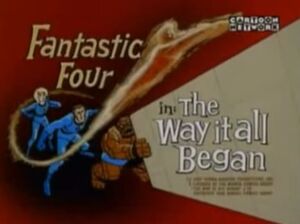 Episode Title
"The Way It All Began"

Appearing in "The Way It All Began"

Synopsis for "The Way It All Began"

Dr. Doom heads towards New York, claiming diplomatic immunity. Sue and the police commissioner summon all the team members to the Baxter Building, where the Fantastic Four prepare for Doom's arrival. There, they get a message from Doom, who tells Reed that he should say goodbye to his team-mates as he only has a few hours left to live. The commissioner asks Reed why Doom hates him, and he tells him of how he and Victor von Doom used to be at the same college years ago. Ben was also there, becoming Reed's roommate, while Doom conducted a dangerous experiment that scarred his face. Doom was expelled, and blamed Reed for his disfigurement. Doom vanished, while Reed and Ben served their time in World War II. After the war, Reed developed a starship, and chose Ben to pilot it, with Sue and Johnny as the rest of the crew. During their first flight, the starship was bombarded with cosmic rays that gave the team their super-powers and turned them into the Fantastic Four. Back in the present, Doom appears at the Baxter Building and completes the story, telling of how, after his scarring, he went to Tibet and was found by a secret order of monks who give him a suit of armor. Their tales now told, Doom and Reed face each other for another battle.

Retrieved from "https://marvel.fandom.com/wiki/Fantastic_Four_(1967_animated_series)_Season_1_7?oldid=5224262"
Community content is available under CC-BY-SA unless otherwise noted.