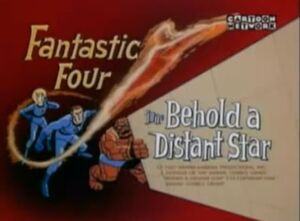 Appearing in "Behold a Distant Star"

Synopsis for "Behold a Distant Star"

On the Skrull homeworld, Warlord Morat is out hunting game when he decides to capture the Fantastic Four in order to impress Princess Anelle's father, the emperor of the Skrulls. The Four themselves are testing out Reed's new rocket when it is bombarded by meteorites controlled by Morat. They are pulled through a space-warp and end up in the Skrulls' galaxy. Upon their arrival, the Four are attacked by Morat's Skrull soldiers. They defeat the Skrulls, but soon lose the use of their powers due to an immobilising ray. They are taken to Morat's base and held captive. Swearing to deliver the Four to Anelle's father, Morat instead attempts to overthrow the emperor with the quartet's aid. As the Skrull emperor journeys to Morat's base to find out what is going on, Morat is told by Reed to use a special ray-gun from his ship. The rest of the team object, but Reed asks them to trust him. Morat uses the weapon on the Four and inadvertently restores their powers. The Fantastic Four are then left to beat Morat and find a way off the Skrull's home planet.

Retrieved from "https://marvel.fandom.com/wiki/Fantastic_Four_(1967_animated_series)_Season_1_8?oldid=5224263"
Community content is available under CC-BY-SA unless otherwise noted.