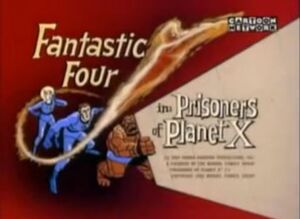 Appearing in "Prisoners of Planet X"

Synopsis for "Prisoners of Planet X"

A UFO appears over the Earth, and after the air force attempt to intercept it, the craft's robot pilot abducts the Fantastic Four from an awards ceremony. Inside the spaceship, they are told by the robot that they are to be taken to Planet X by order of Kurrgo, the planet's master. Kurrgo tells the team that his planet is due to be struck by a rogue planet. In order to prevent his slaves from being killed, Kurrgo asks Reed to find a way of saving his workforce. The Four refuse his request, but Kurrgo forces them to work in his lab. There, Reed determines that the other planet is due to strike Planet X in less than a day. Reed decides to use a shrinking gas to reduce all of the population in size so that they will all fit on the two available escape ships and be saved. Reed shows the gas to Kurrgo, and promises to develop an antidote before the planets collide. As Planet X's population is shrunk, the Four have to return to Earth and end the dictator Kurrgo's rule.

Retrieved from "https://marvel.fandom.com/wiki/Fantastic_Four_(1967_animated_series)_Season_1_9?oldid=5224264"
Community content is available under CC-BY-SA unless otherwise noted.