"A Monster Among Us" 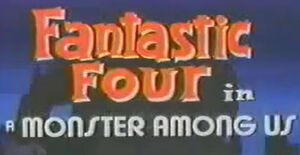 Appearing in "A Monster Among Us"

Synopsis for "A Monster Among Us"

An alien crash lands near a barn. At the Fantastic Four headquarters (Baxter Building), Ben Grimm holds an energy converter while Reed Richards works to fix it. HERBIE runs the operation room and detects a destructive alien force. The Fantastic Four find the alien destroying the city bridge. The Thing and Mr. Fantastic repair the bridge while the Invisible Woman pursues the monster in the Fantasticar. The alien kidnaps Sue Storm and she escapes by turning invisible. HERBIE informs the three super-heroes that they should protect the alien specimen since his companions are watching. Sue Storm makes the alien invisible and the Thing returns him to his space ship. Another bigger alien comes out of the ship and thanks the humans for saving his son.

Like this? Let us know!
Retrieved from "https://marvel.fandom.com/wiki/Fantastic_Four_(1978_animated_series)_Season_1_1?oldid=6497227"
Community content is available under CC-BY-SA unless otherwise noted.