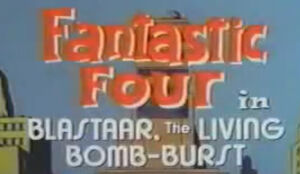 Appearing in "Blastaar, the Living Bomburst"

Synopsis for "Blastaar, the Living Bomburst"

Reed's new experiment yields in the discovery of another dimension known as the Negative Zone. He wants to see if the Zone contains new power sources to help the Earth's energy crisis. Sue then shows the team Lockjaw, the Inhumans' giant teleporting dog, who she borrowed from Medusa. With Lockjaw's help, Ben and Sue are able to teleport themselves to the Negative Zone to retrieve mineral samples. While in the Zone, they come under attack by winged creatures, but manage to defeat them. They soon discover a very large cocoon and realize that the creatures were trying to keep them away from it. Sue hears a heartbeat coming from the cocoon and Reed tells here to bring it back with them. Feeling tired and overworked, the Four decide to go out for dinner leaving Lockjaw to guard the cocoon. Feeling rejected, Lockjaw looks to the cocoon for company. Soon the cocoon bursts open, revealing the evil Blastaar, capable of firing enormous power bolts from his hands. Having overheard the Four talk of Lockjaw's teleporting abilities, he uses the dog to take him all over New York, destroying anything in his way. The team attempt to stop him, but with Lockjaw's help, Blastaar always gets away. The Fantastic Four are left with having to track Blastaar down and imprison him again.

Retrieved from "https://marvel.fandom.com/wiki/Fantastic_Four_(1978_animated_series)_Season_1_13?oldid=5618920"
Community content is available under CC-BY-SA unless otherwise noted.