"The Phantom of Film City" 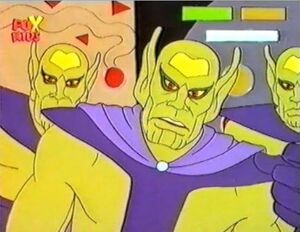 Appearing in "The Phantom of Film City"

Synopsis for "The Phantom of Film City"

While the Fantastic Four are riding in their Fantasti-Car over the city, they notice a tank-like vehicle attempting to rob a bank and the Thing jumps on the vehicle. They discover that the robbery was actually part of a movie scene directed by J.J. Colossal for the movie, The Gigantic Vacuum Cleaner that Devoured New York. He offers the super-hero team to star in his next film once they help him repair the set the Thing destroyed. They accept the offer and travel to Hollywood next week. A mysterious man called the Phantom disguises himself as the art director Mr. Belmont, who plans to sabotage the movie sets and props to get rid of the Fantastic Four. The team must fight a giant robot in one scene of the movie and the Phantom sabotages the machine to really attack the group. Mister Fantastic stretches between two poles while Sue makes him invisible while Ben lures the robot to the trap.

J.J. Colossal dismisses the attacking robot as "a couple of crossed wires," and moves onto the next scene where the Fantastic Four enter the flying saucer which he insists is made of paper-mâché. Once again, The Phantom has interfered with the scene and replaced the fake space ship with a real one with real Skrulls, and the phantom reveals himself to be a Skrull. HERBIE brings the flying saucer back to Earth and the Skrulls agree to leave the planet alone if Reed Richards helps them repair their ship. Director J. J. Colossal assembles the footage of the Fantastic Four battling the sabotaged sets and the group attends the premiere where audiences embrace HERBIE as the star. Mammoth Studios sends a representative telling the Thing that he is legally responsible for the damages he caused during filming.

When HERBIE confirms the robot that the Fantastic Four have to pretend to fight is actually a robot, the numbers on his eyes are 666 and 597.

Retrieved from "https://marvel.fandom.com/wiki/Fantastic_Four_(1978_animated_series)_Season_1_3?oldid=5564264"
Community content is available under CC-BY-SA unless otherwise noted.