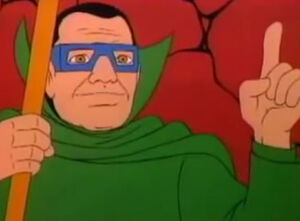 In Europe, a large power plant sinks into the ground, the latest such occurrence. The Fantastic Four are contacted for help, and Reed mentions that a mysterious individual known as the Mole Man is the one who is apparently responsible for the power plants' disappearances. After feeding him the necessary data, Herbie predicts the next plant to disappear will be Russia's largest power plant. The Four travel to Russia and witness the power plant sinking into the Earth's surface. After other plants are sunk into the ground, Herbie tracks the Mole Man's base to the legendary Monster Isle, and the team sets out to find him. Experiencing bad weather conditions, the Four are forced to land on the island, with Ben and Herbie ending up in the Mole Man's lair. He tells them of how he was once a respected scientist who was convinced of the existence of Monster Isle and was ridiculed because of it. He eventually found the island and discovered strange mindless creatures that regarded him as their god. Having dwelt in the darkness for so long also made him develop a radar sense which he demonstrates by avoiding one of Ben's attacks. With Ben and Herbie helpless, the Mole Man tells them that he intends to make the world defenseless while his subterranean armies take over the surface. Reed and Sue track Ben and Herbie down, and together they must stop the Mole Man's armies and return all of the captured power plants to the surface.

Retrieved from "https://marvel.fandom.com/wiki/Fantastic_Four_(1978_animated_series)_Season_1_6?oldid=5224281"
Community content is available under CC-BY-SA unless otherwise noted.