"The Origin of the Fantastic Four Part 1" 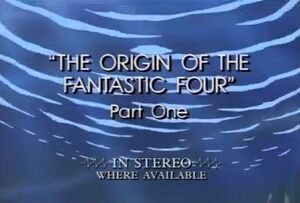 Appearing in "The Origin of the Fantastic Four Part 1"

Synopsis for "The Origin of the Fantastic Four Part 1"

In an effort to raise money for education, The Fantastic Four tell Dick Clark the origin of their amazing powers, and their first confrontation with The Puppet Master, a villain who uses small clay replicas of people to take over their minds. In a running gag, the Thing tries various attempts to convince the audience to send in money for the charity.

In space, the four are bombarded by cosmic rays. The auto-pilot lands the ship back on Earth, where they find themselves physically transformed and possessing remarkable new abilities. Sue can turn invisible. Ben has transformed into an orange, muscular "thing." Reed's body became highly malleable, allowing him to stretch into any shape. Johnny's body bursts into flame, and he can fly. They decide to use their abilities to become the super-team known as the Fantastic Four.

Like this? Let us know!
Retrieved from "https://marvel.fandom.com/wiki/Fantastic_Four_(1994_animated_series)_Season_1_1?oldid=6497240"
Community content is available under CC-BY-SA unless otherwise noted.