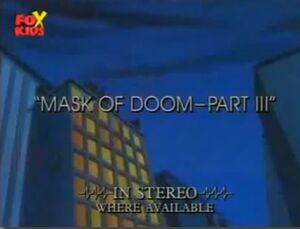 Appearing in "The Mask of Doom Part 3"

Synopsis for "The Mask of Doom Part 3"

Ben, Johnny and Reed are sent back though time to Ancient Greece via Doom's Time Platform. When they arrive they witness a battle between the greeks and the invading Persians and for some reason they decide to help the greeks. The soldiers provide the three with armor and lead them to the Oracle of Delphi for help. She informs them of the location of the coffin, and they follow a river with reed shifting into a type of boat. When they find the coffin they are knocked out by vapors and are imprisoned by the Persians. Using their powers they escape and stop the invading forces. The greeks are grateful for their help and them to stay and Ben takes up their offer. But time platform retrieves them and they return to the present to give the coffin to Doom. The coffin turns out to be a fake and during the distraction the team escapes in the Fantasti-Car.

Retrieved from "https://marvel.fandom.com/wiki/Fantastic_Four_(1994_animated_series)_Season_1_10?oldid=5287604"
Community content is available under CC-BY-SA unless otherwise noted.