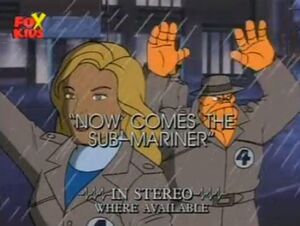 Appearing in "Now Comes the Sub-Mariner"

Synopsis for "Now Comes the Sub-Mariner"

When the team go to hear a lecture, the scientist is revealed to be Namor, Prince of Atlantis, who has risen from the ocean as he grows tired of surface dwellers polluting his oceans. He shows the people the effects of the pollution by mutating an octopus is a tank. He kidnaps Sue Storm in order from her to become his queen. The team travel to Atlantis to rescue Sue and end up battling Namor. During the rescue, Namor learns one of his commanders Krang has began an invasion of the surface world against his wishes. Working together they stop the invasion and an uneasy alliance is made between the four and Namor.

Like this? Let us know!
Retrieved from "https://marvel.fandom.com/wiki/Fantastic_Four_(1994_animated_series)_Season_1_3?oldid=6497246"
Community content is available under CC-BY-SA unless otherwise noted.