"Incursion of the Skrull" 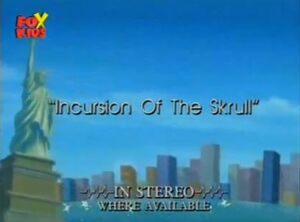 Appearing in "Incursion of the Skrull"

Synopsis for "Incursion of the Skrull"

An evil alien race known as The Skrulls invade the earth and impersonate The Fantastic Four in order to discredit them so they can take over the earth.

In the beginning of the episode, New York is under what appeared to be a pre-9/11 attack by the Skrulls, but it turns out to be a video game played by the Thing who mentions how great the handheld video game is. As the Fantastic Four relax at home, they are contacted by the President to go on a mission to stop an attack by sea monsters attacking off the coast. In truth, he was a Skrull in disguise and sent them away as a distraction. The Thing attacks a power plant. The Invisible Woman steals a valuable gem from a jewellery store. The Human Torch attacks and takes out two military jets. These impostors meet afterwards and reveal how they used their shape-shifting abilities and alien technology to perpetrate their misdeeds. They are Skrulls and they plan on invading Earth. Fearing the Fantastic Four will stand in their way, these four agents want to ruin their reputation. The real Fantastic Four are arrested and imprisoned in separate cells. They escape and uncover the truth.

They find the Skurlls and take them out. The Fantastic Four steal the Skrulls' ship and find their mother-ship in Earth orbit. Posing as the Skrull agents, they trick the captain into believing that Earth is too dangerous to invade by passing off images from movies as real. Reed volunteers to stay behind and remove any trace of the Skrulls' presence on Earth. Convinced his army would be slaughtered, the captain calls off the invasion and awards Reed a medal for bravery. On the way home the Fantastic Four pass through the cosmic rays again, causing the Thing to briefly return to human form.

Once back on Earth, the Fantastic Four clear their names by proving the existence of Skrulls to the military. The remaining three Skrulls transform into goats, and then Reed hypnotizes them into believing they are real goats. They are left in a field where they can live out their lives.

Like this? Let us know!
Retrieved from "https://marvel.fandom.com/wiki/Fantastic_Four_(1994_animated_series)_Season_1_4?oldid=6497247"
Community content is available under CC-BY-SA unless otherwise noted.