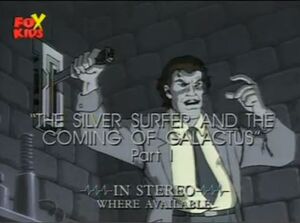 Appearing in "Silver Surfer & the Coming of Galactus Part 1"

Synopsis for "Silver Surfer & the Coming of Galactus Part 1"

While relaxing at home, Johnny and Ben argue over the TV, and when they break it, they go to Reed's lab for him to fix it. There, Reed has discovered an energy signature similar to the cosmic radiation that gave their powers. Then the entire skyline appears as if it had caught on fire. The Human Torch flies through the city canyons to get a closer look, but panicking New Yorkers begin to suspect that the Torch may actually be responsible for the strange phenomena. The FF return to the Baxter Building and Reed sequesters himself inside of his laboratory to analyze the situation. The flames in the sky dissipate giving way to an unending field of space debris.

The powerful being known as the Watcher appears inside of Reed's laboratory. He explains that he is responsible for the atmospheric disturbances, for he has been attempting to conceal Earth's existence from the attention of the Silver Surfer. He further explains that the Surfer is the advance scout of Galactus, a powerful cosmic being that consumes the elemental energies of entire worlds, leaving them as little more than dried, lifeless husks.

The Surfer meanwhile, investigates the debris field, and finds Earth hidden beneath it. He flies to the roof of the Baxter Building and sends out a cosmic signal for Galactus. The FF race to the top of the building, and the Thing rams into the Surfer knocking him off the edge. The Surfer is no longer a major concern however. In the sky above, Galactus' planet devouring Worldship, emerges in the skies above Manhattan. The giant Galactus exits the ship and declares his intention to consume the entire world.

Retrieved from "https://marvel.fandom.com/wiki/Fantastic_Four_(1994_animated_series)_Season_1_5?oldid=5580188"
Community content is available under CC-BY-SA unless otherwise noted.