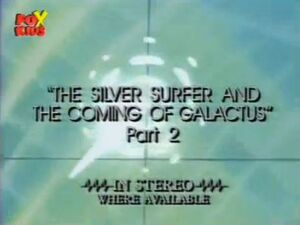 Appearing in "Silver Surfer & the Coming of Galactus Part 2"

Synopsis for "Silver Surfer & the Coming of Galactus Part 2"

With Galactus on Earth, the Watcher tries to appeal to the planet eater to leave Earth alone. When diplomacy doesn't work, Johnny and Thing try to attack Galactus to no effect. Watcher tells them to return to their base and he will contact them shortly.

Meanwhile, the unconscious Silver Surfer is taken in and cared for by Alicia Masters. Meanwhile, Galactus continues to assemble his planet devouring device and the Watcher explains to the Fantastic Four what will happen to the Earth if Galactus succeeds. The Watcher explains that there is a device aboard Galactus' ship that he will need the Human Torch to collect. While back at Alicia's apartment, Alicia learns of the Surfer's mission on Earth and appeals to him to turn against his master and help save the Earth.

When the Fantastic Four begin attacking Galactus' almost completed device, the planet eater summons Firelord and Terrax to fend them off. With this distraction and delay, the Watcher uses a device to boost Johnny's powers to a degree that will allow him to travel to Galactus' ship and retrieve the weapon they need to defeat him. While finally, Alicia convinces the Surfer to help save the Earth.

Retrieved from "https://marvel.fandom.com/wiki/Fantastic_Four_(1994_animated_series)_Season_1_6?oldid=5224297"
Community content is available under CC-BY-SA unless otherwise noted.