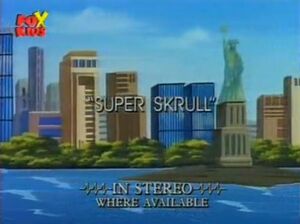 Building a device to block this power, Reed has his comrades take their fight with the Super-Skrull to a mountain with cavernous peak. There Reed activates the power-blocking device depowering the Super-Skrull, the Human Torch then seals the Skrull inside a volcano.

Like this? Let us know!
Retrieved from "https://marvel.fandom.com/wiki/Fantastic_Four_(1994_animated_series)_Season_1_7?oldid=6497250"
Community content is available under CC-BY-SA unless otherwise noted.