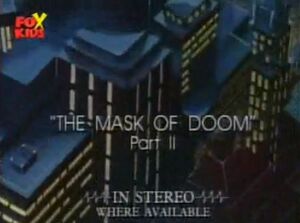 Appearing in "The Mask of Doom Part 2"

Synopsis for "The Mask of Doom Part 2"

While at dinner, Doom recounts the tale of his father to Sue. She listens hoping to learn more about the man holding her friend hostage. The tale reveals that his father Werner von Doom was a brilliant gypsy scientist and doctor who used his advanced skills to help cure the local people. He was attacked by a group of thieves hoping to steal his secrets. He fights them off with the use of advanced technology. Werner was then recruited by a local baron to cure his wife, but Werner was unable to. The baron sent his men to hunt down Werner and his son, but while on the run his father dies of hypothermia, leaving Victor alone. He later enrolls in Empire State University in America where he meets another young scientist Reed Richards. They worked together, but Victor's experiments were to dangerous, and one night while working alone his experiment explodes scarring his face. While looking for a cure for his deformity he travels to the Himalayas and meet a group of monks who help him forge a mask to become his true face. While Doom tells the story, the rest of the team must risk life and limb dealing with Doom's traps to rescue Sue. They find Doom and attack him, but he is revealed to be a Doombot, and the real Doom appears and traps them in a energy field. He sens them on a mission to retrieve a coffin lost centuries ago. He uses his time platform to send them back to ancient Greece.

Retrieved from "https://marvel.fandom.com/wiki/Fantastic_Four_(1994_animated_series)_Season_1_9?oldid=5287603"
Community content is available under CC-BY-SA unless otherwise noted.