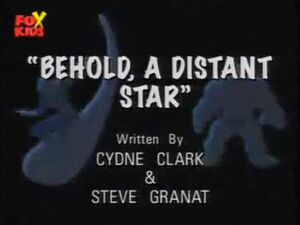 Appearing in "Behold a Distant Star"

Synopsis for "Behold a Distant Star"

Sue needs life saving surgery and the only person capable of performing it is her father but he’s has been in hiding for years since being accused of murder. When he arrives to save his Daughter to help, he is arrested after the operation. Meanwhile, Super Skrull returns and takes Franklin Storm's place to exact revenge.

Like this? Let us know!
Retrieved from "https://marvel.fandom.com/wiki/Fantastic_Four_(1994_animated_series)_Season_2_10?oldid=6497254"
Community content is available under CC-BY-SA unless otherwise noted.