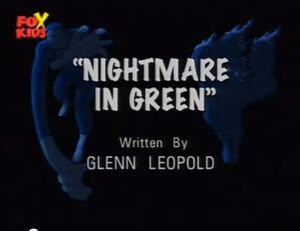 Appearing in "Nightmare In Green"

Synopsis for "Nightmare In Green"

Bruce Banner is searching for a cure for The Hulk, and hopes that Reed Richards will help him find it. Unfortunately, Dr. Doom has other plans for the green goliath, mainly to kill The Fantastic Four!

As the episode ends with The Juggernaut's hand raising out of the water, it might have been a subtle nod to "The Phoenix Saga: Cry of the Banshee" in which the Juggernaut was launched into the Atlantic Ocean.

Retrieved from "https://marvel.fandom.com/wiki/Fantastic_Four_(1994_animated_series)_Season_2_9?oldid=5427437"
Community content is available under CC-BY-SA unless otherwise noted.