The film begins with Reed Richards (Alex Hyde-White) and Victor Von Doom (Joseph Culp) as close university colleagues who decide to use the opportunity of a passing comet to try an experiment. However, the experiment goes wrong, leaving Victor horribly scarred. Sue and Johnny Storm are seen as two children living with their mother who runs a boarding house where Reed lives. Ben Grimm (Michael Bailey Smith) is a family friend and college buddy of Reed's. The film then fast-forwards to the present (early 1990s) where Reed, Sue (Rebecca Staab), Johnny (Jay Underwood), and Ben are planning a mission to space as once again the same comet would pass by the Earth as it did before when Reed was in college. Running late to meet the others, Ben crosses paths with the artist Alicia Masters (Kat Green), a blind sculptor who quickly begins to develop feelings for the strong yet kind-hearted Ben. Reed dedicates this mission to his friend Victor, believing he had died years before. The team goes up in an experimental spacecraft only to be hit by cosmic rays from passing comet due to their ship having been intentionally sabotaged- the giant diamond Reed planned to use to collect the cosmic rays having been replaced with a replica.

Upon crash landing back to Earth, the four of them soon discover that the cosmic rays gave them special powers; Reed can stretch his arms, Sue can turn invisible, Johnny can make fire come out of his hand, and Ben has transformed into the Thing. They were then taken into "protective custody" by the Marines soon after, later revealed to be Doom's men posing in military attire, as everyone else associated with the mission believes them to be dead. They escape from Doom's men to regroup at the Baxter Building and try to decide what to do now that they have gained superpowers. An angry Ben leaves the group to go out on his own, feeling that he has become a horrible freak of nature. Ben would later be found by the Jeweler (Ian Trigger), a master thief, and his gang of vagrant followers and join them in their underground lair.

It is revealed that previously, Victor, still alive and now calling himself Doctor Doom, intended to steal the diamond that Reed Richards was going to use to capture the comet's rays in space. Doom's henchmen waited outside the Baxter Building for the right moment to go in, until they saw the Jeweler break in first. Doom ordered his men to let him take it figuring it would be easier to obtain by later simply finding the Jeweler's lair and making a deal, with the added bonus being the Jeweler left a phony behind which would likely cause the space mission to fail. Unbeknown to Doom, the Jeweler would then give the real diamond to Alicia Green whom he has secretly stalked, eventually having her kidnapped by his homeless henchmen. The Jeweler wished Alicia to be his bride, the diamond being his wedding gift to her.

Doctor Doom and his henchmen locate the Jeweler's lair and Doom's henchmen first try to bargain with him, but with no luck. A displeased Doom then makes a personal appearance to the Jeweler to take the diamond by force. Doom personally holds Alicia hostage at gunpoint stating he would kill her unless the Jeweler gave up the diamond willingly. Just then the Thing enters the room only to accidentally revert to human form, thus prompting Doom to shoot at him. Ben runs out onto the city streets only to shout out of anger for not being able to do more. His emotional outburst triggers his reverting back into the Thing and Ben heads back into the lair to break Alicia free.

Meanwhile, a gunfight ensues between Doom and the Jeweler’s men. Doom absconds with the diamond and Alicia, who is still his hostage, as he intends to use the diamond to power a laser cannon he has set to destroy New York City. Ben returns to his friends and by this time Reed had finally figured out who was behind their kidnapping-- none other than Reed's old college buddy, Victor. Realizing that they are the only ones that can stop Doom's mad schemes, the heroes don the 1960's style Fantastic Four costumes and travel Latveria to Doom's castle to save the city.

At the castle, the Fantastic Four are momentarily captured but manage to break free. They battle a series of Doom's foot soldiers while Reed has a final face-off with Victor. Doom is defeated, possibly killed, and Johnny Storm is forced to transform fully into a Human Torch to block the laser beam from destroying the city. Crisis averted the heroes depart, as the audience is given a glimpse of one of Doom's gauntlets which begins to move, implying the villain may still be alive.

Having saved the city and deciding to dedicate themselves to fighting crime, the film ends with Reed and Sue's wedding. Ben and Alicia are seen as a couple. 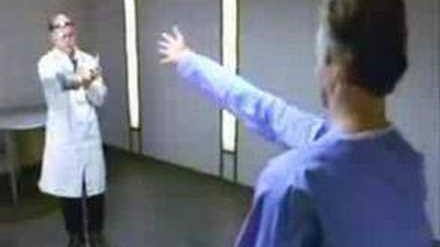