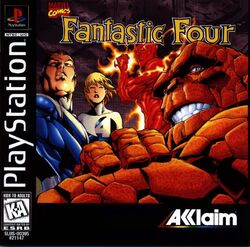 Doctor Doom has developed a device that transports the Fantastic Four (and the She-Hulk) to multiple locations to do battle with various monsters and super-villains. One or two players (or up to four with a special adapter) can control Mr. Fantastic, Invisible Woman, The Thing, Human Torch or She-Hulk through various side-scrolling arcade levels until Mr. Fantastic is able to assemble a time machine that allows him to transport the team to Doom's tiny kingdom for a final battle. While Galactus does not appear in the game, it is clear that he is behind the destruction of the Skrull home-world.

Like this? Let us know!
Retrieved from "https://marvel.fandom.com/wiki/Fantastic_Four_(1997_video_game)?oldid=6402420"
Community content is available under CC-BY-SA unless otherwise noted.