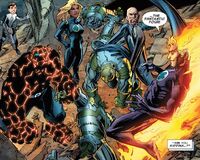 Base of Operations
Abandoned S.H.I.E.L.D. base; formerly Baxter Building
Affiliations

After the Fantastic Four left to a cosmic voyage, an alliance between Doctor Doom, Kang and Annihilus conquered the Earth.

The Fantastic Four returned and formed an resistance composed by what was left of the Future Foundation, Namor, and the time-displaced Jean Grey, whose presence helped them remain hidden from Kang's forces.

Using a hijacked Doombot, the Fantastic Four launched an attack to the Baxter Building (Doom's current headquarters) in order to deactivate the chrono-dimensional shield surrounding the Earth which prevented help arrive from any point of space or time. When they got to the power core, they discovered it was booby trapped. They decided to continue the plan and use one of Invisible Woman's force fields to contain the blast. However, when they destroyed the core, depowering the shield for a split second, and launched a cosmic signal flare out to space along with the essence of their powers, the blast from the trap stripped them from their entire powers.

Doctor Doom faced them, and disfigured Human Torch's face after Johnny mocked him. Johnny later managed to escape this universe and regain his powers to get help,[1] but the rest of the Fantastic Four died.[2]

The cosmic flare with the essence of their powers found the Fantastic Four of Earth-616, but the overload of powers caused problems to them.[3]

Retrieved from "https://marvel.fandom.com/wiki/Fantastic_Four_(Earth-13266)?oldid=5546596"
Community content is available under CC-BY-SA unless otherwise noted.