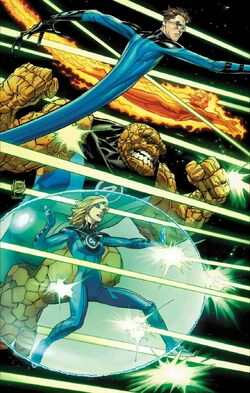 What you four have become... Fantastic.

Over a decade ago, the U.S. government, under the auspices of the Directory of Mainland Technology Development, began gathering international child prodigies at a Manhattan laboratory facility in the Baxter Building, giving them the best resources and teachers the project could afford. Headed by scientist Franklin Storm and the U.S. military's General Ross, the project discovered the N-Zone, an other-dimensional space which paralleled our own. When 11-year-old Reed Richards independently accessed this zone and began sending small toys into it, the project recruited him to join their work. Over the following ten years, Reed Richards, Victor Van Damme, and other students and instructors worked on the project before the government ultimately constructed its N-Zone teleportation gate in the Nevada desert, intending to teleport an apple to a receptor in Guantanamo Bay, Cuba.[2]

Arthur Molekevic, a fired Baxter Building instructor who had covertly observed the experiment and its transformed subjects, sent his artificial Ani-Men after the five. Initially retrieving Susan while the government gathered Reed, Ben, and Johnny at the Baxter Building, Molekevic then sent what seemed to be an enormous monster after them. Defeating it they followed it to Molekevic's underground laboratories and retrieved Susan, inadvertently destroying the underground chambers in the process and apparently burying Molekevic. The government relocated the remaining Baxter Building students to a secondary facility in Oregon, and dedicated the Manhattan facility to the quiet study of the altered four.[4]

When Van Damme attacked the Baxter Building six months later, Reed tracked him to Copenhagen. Refused permission to go to Denmark by the government, the quartet went anyway in Reed's childhood "Fantastic-Car," knowing they needed Victor's knowledge to restore themselves. Battling Van Damme, they were unable to defeat him before the military arrived and were forced by international law to set him free.[5]

The four used a reconstructed N-Zone transporter to pilot a decommissioned U.S. Space Shuttle, heavily modified by Reed Richards and awkwardly christened the "Awesome" by Johnny Storm, to explore the N-Zone itself. The quartet made contact there with a being known as Nihil, who tried to kill them and follow them back to Earth, where both ships crashed in Las Vegas. They were officially "outed" as super-humans on the Sunset Strip while defeating Nihil and his alien crew. [6]

Returning to the Baxter Building, they were briefly attacked by a rejected Baxter thinker named Rhona Burchill who was jealous of Reed's status,[7] and subsequently aided the Ultimates, with Ben and Johnny fighting beside Nick Fury, Carol Danvers, and the Ultimates' Thor and Black Widow against the Free while Reed and Sue went into space with Iron Man to investigate Gah Lak Tus. [8]

The quartet also investigated the mystery of a secret race known as the Inhumans, then a group of Chrono-Bandits across time after they duplicated a time machine which Reed and Sue had co-created. Later, Reed made interdimensional contact with another universe's version of the Fantastic Four, bringing the team into conflict with an alternate reality infected with a zombie-creating virus. [9]

The Human Torch was arguing with his father, Franklin Storm, shortly before the tidal wave hit New York, killing him. Johnny, who was in shock over his father's death, was captured by Dormammu, who began channeling the Human Torch's flame to escape and attack New York City. After killing Dr. Strange, Dormammu fought the Invisible Woman and the the Thing, but was eventually defeated and reverted to his human form. Mister Fantastic, upon returning from his battle with Magneto, was reunited with his teammates. He soon realized that Dr. Doom would continue to destroy the world if he wasn't stopped and prompted the Thing to go to Latveria and kill him.[8]

After the funeral of Franklin Storm, Reed Richards' marriage proposal was rejected by Sue, and the Fantastic Four disbanded. The Thing enlisted in S.H.I.E.L.D., the Human Torch opted to live a quiet life in France, the Invisible Woman continued to do research at the Baxter Building, and Mister Fantastic moved back in with his biological family as he pondered what to do next.[10]

Aftermath of the Fantastic Four

Although, the team has officially disbanded, these four individuals continue to have contact. Reed Richards faked his death and was later revealed to be the Ultimate Enemy.[11] When Sue Storm confronted Richards about his duplicity as well as his sinister plans, Reed savagely beat Sue Storm. In retaliation, Johnny Storm later disfigured Reed's face with his flame powers.[12] Sue has most recently dated her former team mate, Ben Grimm.[12]

The Thing
Add a photo to this gallery

Retrieved from "https://marvel.fandom.com/wiki/Fantastic_Four_(Earth-1610)?oldid=5177375"
Community content is available under CC-BY-SA unless otherwise noted.