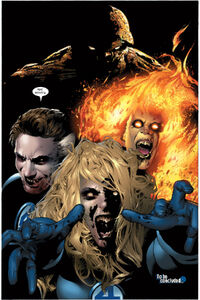 Origin
Aeronautical engineer Reed Richards inadvertently created the Fantastic Four after deciding to make a test flight on the starship he had been working on. While it would make it possible to travel to other star systems, financiers were losing interest. His girlfriend Susan Storm and her brother Johnny insisted on joining Reed and his friend Ben Grimm, the pilot. While in space, the spaceship encountered a wave of cosmic radiation, causing both the mission to be aborted and the craft to crash. Emerging from the ruins of the spaceship, they discovered the radiation had mutated their bodies. Reed gained the ability to stretch his body and limbs, Johnny was able to fly and become engulfed in flame, and Sue was able to bend light around her body and become invisible. Ben on the other hand gained incredible strength and durability, with the cost of being severely disfigured. All four decided on using their powers to better humanity, and founded the Fantastic Four.

Little is detailed about the lives of the Fantastic Four before the zombie plague arrived on Earth-2149, however it can be presumed that it followed almost the same path as the Fantastic Four of Earth-616. The only exception is that their encounters with the Silver Surfer and Galactus never occurred at all like they did on Earth-616, as evidenced by the Marvel Zombies' unfamiliarity with Galactus and Surfer[1] and this Surfer's unfamiliarity with Earth.

The Fantastic Four had been out, presumably doing what they could for the zombie infested city, believing Franklin and Valeria had been secure in a code-locked area of the Baxter Building. Unfortunately, on their return they find She-Hulk, who also had the access codes, has been zombified and killed Sue and Reeds children. Furious, Sue blows She-Hulk’s head up with a force field. Just then, they receive a call from Nick Fury, informing them of the gathering resistance movement aboard the S.H.I.E.L.D. Helicarrier.

On their way to the Helicarrier in the Fantasticar, they run into Nova and Thor, and together they head to join the resistance. Once there, Fury calls them all together and explains that it seems to be the end of the world, and though they may have had differences in the past, they are all on the same side now.

While a team is dispatched back to the surface, the Fantastic Four and a few of the boffins stay behind to try and work out how exactly to stop this thing. Reed is working in a lab on some zombified remains, he finds the whole thing fascinating, and marvels at the efficiency of the creatures, Sue is enraged that he could be so analytical about the things that killed their offspring.

Later, Sue, Johnny, and the Thing, approach Reed once more. However, Reed is still extolling the virtues of zombification, and explains that as they entered he pricked their skins and infected them without their knowledge. Sue, and the others turn and fall upon a laughing Reed, biting and infecting him in turn.

When Reed has made the teleporter operational, he attempts to con an alternate reality version of himself to open a passageway between their worlds. Completely fooled, the young Reed exits the teleporter into a dilapidated and abandoned Baxter Building, and when he stumbles out into the post-apocalyptic street, zombified Sue and the others appear to ‘greet’ him.

Reed tells the younger version of himself how the plague began on this world, with purple lightening, and something falling from the sky, and that within 24 hours the planet was consumed. He says that now they have run out of food, and they try to grab the young man, but he manages to get away and flee down the sewers.

Presumably, when young Reed evades Human Torch, the Fantastic Four decide they can get all the food they want by using the teleport, and go back to the Baxter Building. They arrive just as Sue, Ben, and Johnny, turn up to find out what has happened to Reed. As the zombified FF attack, Ultimate Invisible Woman protects the remaining three of the four, with a forcefield, and they manage to lock their zombified counterparts up.

They are moved to a more secure containment area, but Reed tells the younger FF that this is only temporary. According to Reed they are fed twice a day, when live animals are squeezed into the cell.[3]

Later, with the Ultimate Fantastic Four seeking help from Victor van Damme, the zombified FF put their plan in motion. They convince the guards outside that they have created a teleportation device from a pen, the chemicals from ink, and using a hair as a keyboard.

Confusingly finding Doctor Doom coming to save the day, the zombie FF attack. Doom extinguishes Human Torch; snaps off Things arm; and, when Sue tries to pop of field inside Doom’s head, she finds nothing but cold steel, so Doom, using magic, necrotises Sue’s body even further. Then Reed steps up and tries to envelope Dr Doom, but he conjours up maggots that begin to eat through his dead flesh.

Finally, the zombified Fantastic Four are dumped through the operational teleport back into the street of their own dimension.

In the Ultimate Universe, the Frightful Four are zombified counterparts of the Fantastic Four from the Marvel Zombies dimension. They possess all the powers of the Fantastic Four, along with many years more of experience, but are in a state of gradual decay, and a hunger for living flesh. They have repeatedly stated their goal is to spread the virus they carry on to the superhumans of the Ultimate universe.

The Four were captured upon their arrival to the Ultimate Universe, and have been kept in a special holding cell designed by Reed Richards to contain the Hulk. They escaped but they were quarantined to the top 40 levels of the Baxter Building. They are currently reconfiguring a portal Ultimate Mister Fantastic was working on to allow their "friends" from the zombie universe into the Ultimate one.

The Ultimates gathered at the foot of the Baxter Building as plans were made to drop the field and attack the zombies, when Doom (in Mister Fantastic's body) returned. Claiming that his first priority was to help Johnny Storm, he cast a spell to remove the creature that was killing him. However he miscast the spell, having partially translated it wrong, and the creature, while being drawn out of Johnny successfully, was not sent back to the Negative Zone.

It remained on Earth, and immediately sought out a powerful host. Most thought it was Thor, but the parasite bypassed the Thunder God completely, possessing Reed (in Doom's body), Reed having followed the FF back to the city. He went in to confront the Frightful Four; the zombies were pleased that they did not need to call their friends and thus share the 'food.' Reed killed the undead Human Torch first, releasing a chemical from his mouth that dissolved him. The undead Thing attacked next, mockingly asking if Doom was a hero on this reality, but Reed used Doom's strength to easily rip off the undead Thing's arm and shatter him with it.

The undead Mister Fantastic and Invisible Woman attacked next, but Invisible Woman's powers seemed to have no affect on him, Doom's steel body protecting Reed from her force fields. He used Doom's magic to speed up the rate of the undead Invisible Woman's decay, rotting her to bones and dust rapidly. The zombie Mister Fantastic, panicking and enraged, demanded to know what was going on. Reed responded by using Doom's magic again, summoning hordes of maggots and other bugs and creatures that eat necrotic flesh to devour his undead counterpart from within.

The portal the zombie FF had been working on, however, had been opened. Reed dumped the bodies of the zombie FF back into their home reality and was prepared to go there himself, taking the parasite (and Doom's body) with him. Doom, admitting his mistake on the spell and proclaiming that he was not without honor, reclaimed his body and travelled to the zombie world, the portal closing behind him. His last words on this world were a demand for all to remember the sacrifice he had made (Unfortunately for Doom, he received no credit with it all going to the Fantastic Four in the media).

He arrived just as the last surviving zombies were finishing their devouring of Galactus. They noticed Doom and turned on him, charging to the attack. Doom commented, with some amusement, that he was in for a challenge.[4]

Retrieved from "https://marvel.fandom.com/wiki/Fantastic_Four_(Earth-2149)?oldid=5558967"
Community content is available under CC-BY-SA unless otherwise noted.