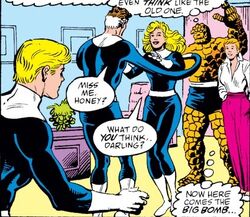 The past history of the Fantastic Four of Earth-30987 mirrors that of their Earth-616 counterparts up until prior to the original Secret Wars. A divergence occurred when the Thing of Earth-616 took possession of his past self in an attempt to change history so that he could marry Alicia Masters instead of his best friend Human Torch in his own time.

As a result, the Thing prevented himself from being whisked away to Battleworld to fight in the Secret Wars. He then asked Alicia to marry him and she accepted. When Mister Fantastic and the Human Torch returned from the Secret Wars, the wedding went on. However, eventually the Thing grew guilty over robbing Johnny and Alicia of future happiness and called the wedding off at the last possible moment. Ben then fled the wedding and had his ally Thundra return him to his own time. [1]

The fate of this incarnation of the Fantastic Four is unknown at this time.

Like this? Let us know!
Retrieved from "https://marvel.fandom.com/wiki/Fantastic_Four_(Earth-30987)?oldid=6541680"
Community content is available under CC-BY-SA unless otherwise noted.