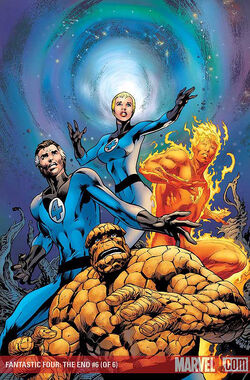 The full history of the Fantastic Four in this timeline is unknown, but it is presumably similar in many-to-most respects to their Earth-616 counterparts until an unknown point where a series of 'mutant wars' devastate the globe. The Fantastic Four survive the global conflagration and Reed Richards assumes a position of global leadership following the war, enabling humanity as a whole to survive and helping to rebuild the shattered planet afterwards.

However, Doctor Doom -- who also survived the conflict, albeit having suffered horrific injuries forcing him to replace large parts of his body and numerous limbs with 'advanced' cybernetic alternatives and having lost his political and technological power-base -- rejects Reed's overtures and attacks the Four in their satellite above the Earth, having nothing left to him but his vendetta against the Four. During the battle, the young Franklin and Valeria Richards, having developed superpowers of their own, engage Doom in combat against the advice and wishes of their family, triggering an explosion which seemingly kills Doom, Franklin and Valeria.

Broken by the loss of Franklin and Valeria, the Four go their separate ways. Reed loses himself in his work, producing great technological advances which enable humanity to live longer and transforming the Earth and surrounding solar system into a techno-utopia -- however, he is gradually isolating himself from humanity as a result. Sue Richards becomes obsessed with locating a way to rescue her children and begins researching esoteric items of arcane significance to help her achieve this goal. Johnny Storm remains in the public eye as the Human Torch, this time as the leader of the Avengers, now a planetary defence force working to protect the entire solar system, which has been colonized by humanity and subject to a quarantine by other major intergalactic species. And Ben Grimm, now partially cured thanks to the efforts of Reed, has retired to Mars to start a family with Alicia Masters and to live among the Inhumans, who have relocated there en-mass.

Retrieved from "https://marvel.fandom.com/wiki/Fantastic_Four_(Earth-71166)?oldid=5546657"
Community content is available under CC-BY-SA unless otherwise noted.