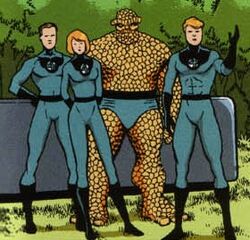 The Fantastic Four seemingly had a similar history as its Earth-616 counterpart. They were a team of superheroes operating in Manhattan.

Mister Fantastic detected a dimensional transporter in the Atlantic Ocean. He and Invisible Woman left to investigate, but were unable to find the creature. Meanwhile, Human Torch, during a team-up with Spider-Man, captured an enraged Qeelocke. On their way back to the Baxter Building, Johnny met Freefall, but she quickly blew him off.

They met again and Johnny realized she was looking for Qeelocke, with her breaking into the Baxter Building when he mentioned her pet was growing exponentially. He tried to calm her down, but Burnout misinterpreted his gesture as an attack and started a fight between Gen¹³ and the Fantastic Four. Their fight escalated until Reed and Sue returned.

Qeelocke outgrew has cage and escaped while the creature in the atlantic rampaged throughout New York City. Mister Fantastic theorized that Qeelocke and the creature was drawn to one another and getting ready to fight each other. The two teams agreed to work together, but were unable to stop the beasts. Instead, they drew them to Central Park to avoid civilian casualties. The two creatures engaged, subverting expectations by mating rather than fighting. Once Qeelocke returned to normal, the two teams went their separate ways.[1]

Retrieved from "https://marvel.fandom.com/wiki/Fantastic_Four_(Earth-7642)?oldid=6079538"
Community content is available under CC-BY-SA unless otherwise noted.