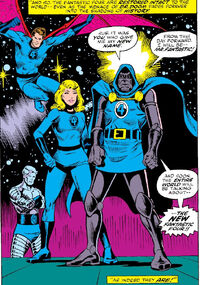 On Earth-7712, Reed Richards, Susan Storm, Johnny Storm and Ben Grimm would take an unauthorized flight in Reed's experimental rocket into space and be exposed to Cosmic Rays much like their Earth-616 counterparts. However, in this reality, each member would be endowed with different abilities:

Reed would become a disembodied brain with massive telepathic powers dubbed Big Brain, Sue into the elastic bodied Ultra-Woman, Johnny into a cyborg Mandroid and Ben the reptilian winged Dragonfly. The group would organize as the Fantastic Four and set up their base of operations within New York's Baxter Buildings. In their earliest adventures they would face such foes as Miracle Man, Sub-Mariner, the Skrulls, and the Mole Man. The circumstances and outcomes of these battles (short of the Fantastic Four being victorious in each one) remain largely unrevealed. The team would operate mostly with Ultra-Woman, Dragonfly and Mandroid acting in the field with telepathic support of Big Brain from headquarters. Reed would spend his time working on inventing new devices but would soon grow worried that in his current state he would lose Sue to Ben Grimm.

After the Fantastic Four would foil a demon in the employ of Dr. Doom (attempting to steal some of Black Beards treasure from a museum) they would earn the Latverian monarchs ire. Realizing their leader was none other than his old university rival Reed Richards, Doom would target Richard's insecurities and trick him into accompanying him back to Latveria to obtain a new body. In reality, Doom really sought Richard's incredible brain power to power his time machine, and would clash with Mandroid when making his escape with Richard's brain.

The Fantastic Four would next be tapped by the Time Variance Authority to stop Immortus from taking over the multiverse by absorbing massive amounts of chronal energy. Targeting Nathaniel Richards in his youth before he became Immortus, they would opt to send the Fantastic Four of Earth-7712 to battle young Nathaniel due to their belief that this incarnation of the team was more powerful than their Earth-616 counterparts. They would prompt the young Nathaniel to use doomsday weapons to kill them all[2]. After the Timequake event, the TVA resurrected a number of the beings they used that were killed during the event, it is unrevealed if the Fantastic Four of Earth-7712 were among those resurrected by the TVA. Further, Earth-7712 was visited by Vangaard who was destroying realities that he found redundant[3], it remains unrevealed if Earth-7712 was among those realities that were destroyed.

Retrieved from "https://marvel.fandom.com/wiki/Fantastic_Four_(Earth-7712)?oldid=5546664"
Community content is available under CC-BY-SA unless otherwise noted.