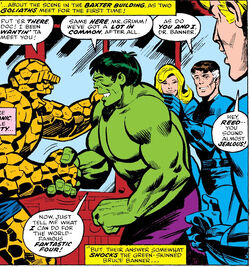 The past history of the Fantastic Four of Earth-774 mirrors that of their Earth-616 counterparts up until Bruce Banner's transformation into the Hulk. In this reality, whenever Bruce Banner becomes the Hulk, he would still retain his human intelligence.

As a result, Reed Richards asks Banner to aid in curing Ben Grimm of being the Thing. Banner and Richards succeed however this leads to the end of the Fantastic Four. Withoutthe Thing's strength, Johnny Storm would retire, deciding to go to college and get an education as Ben would pursue a normal relationship with his girlfriend, Alicia Masters. Reed and Sue remain at the Baxter Building and eventually invite Bruce and his wife Betty to live with them.

Ultimately, Reed loses his powers battling Galactus and Ben reverts to the Thing -- albeit more powerful than before and with a seething hatred of humanity[1]

Like this? Let us know!
Retrieved from "https://marvel.fandom.com/wiki/Fantastic_Four_(Earth-774)?oldid=6445345"
Community content is available under CC-BY-SA unless otherwise noted.