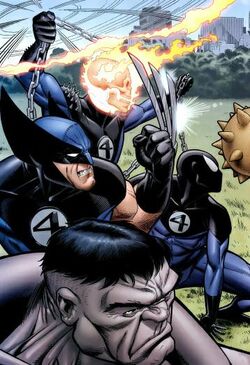 After the original Fantastic Four were killed by the Skrull De'lila, she assembled a 'new' FF consisting of Spider-Man, Wolverine, Ghost Rider, and the Hulk to 'help' her recover a long-lost Skrull weapon. After her deception was exposed, while attending the funeral of the original FF, Captain America and the now-human Ben Grimm suggested that the new FF remain together as a team, Grimm providing the team with official access to all of their predecessor's equipment. Although the team were initially uncertain about this choice, both due to the circumstances of their origin and the fear that they would have to face both the FF's rogues and their own individual enemies, after Doctor Doom and Mephisto attacked them with the sacrifice of a new Frightful Four, the new Fantastic Four redeemed themselves in the public's eyes as they defeated this formidable group.[1]

Retrieved from "https://marvel.fandom.com/wiki/Fantastic_Four_(Earth-808122)?oldid=4489770"
Community content is available under CC-BY-SA unless otherwise noted.