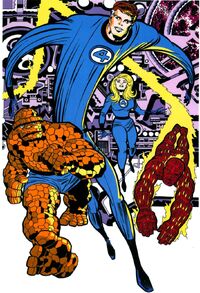 The history of the Fantastic Four of Earth-8466 mirrors that of the early history of their Earth-616 counterparts. [1] In this reality the Fantastic Four clashed with Janus the Mega-Man who was making a series of brazen robberies in New York City with his "Mega-Power" device. Janus had tricked his brother Corwin Janus into allowing him to commit the crimes under the false promise that the money was going to cure Corwin's crippled legs. The Fantastic Four thwarted Janus and revealed that the Mega-Power proved to be miracle cure that Corwin needed to walk unaided again. The Mega-Man was then turned over to the authorities.

Retrieved from "https://marvel.fandom.com/wiki/Fantastic_Four_(Earth-8466)?oldid=3126249"
Community content is available under CC-BY-SA unless otherwise noted.