I've had it! From now on, you three can fight Doc Doom all by yer lonesomes! Every time I put the kibosh on 'im, he turns out ta be a blasted robot!

Appearing in "The Endgame Cometh!"

Synopsis for "The Endgame Cometh!"

Brief Summary:
Doctor Doom is successful in transferring the Silver Surfer's Cosmic Power into a newly created android and quickly sends his creation to attack the Fantastic Four. Meanwhile, the Silver Surfer attempts to get Shalla-Bal to remember him and who she is. She remembers the name Norrin Radd, but she also remembers that she was just a poor villager before Doom brought her into his scheming plans. Realizing that she is not Shalla-Bal, the Surfer races off to help the Fantastic Four battle the cosmic-powered Doomsman II. With his assistance, they are able to destroy Doom's latest creation. The heroes leave Doom's castle, while Mephisto watches over them. It's revealed that the woman was actually Shalla-Bal, but Mephisto wiped her memory and hid her from the Surfer on Earth. Just another plan of Mephisto's to torment the Surfer. 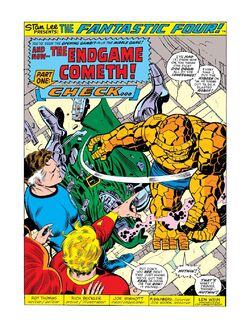 Detailed Summary:
Part One: Check...
Disgusted at having done nothing more than shattering a Dr. Doom robot, Ben tells his teammates to fight Doom themselves. Reed tries to persuade Ben to remain with them, saying that they've got Doom on the run. Ben does not believe him, however, and he declares that Doom is probably spying on them at this very moment. And indeed, Doom turns away from his view-screen, satisfied that he will soon be waging his final battle against them. He recalls how the Silver Surfer delivered them to Latveria, where Doom imprisoned them and lured the Silver Surfer into a harmless looking chair. The chair is actually a device that duplicates the Surfer's Power Cosmic within a giant android that Doom created. Then Doom peers through a window at his Doomsman II—named after the original Doomsman—and commands it to rise. Crackling with cosmic energy, the Doomsman flexes his limbs and shatters the platform to which he is attached. Then he tears through a stone wall and stands before Doom awaiting instructions, utterly subservient to the evildoer. The Doomsman muses Doom, has all the Surfer's strengths and none of his "insipid" weaknesses. No longer needing the Silver Surfer's energy, Doom presses a button, and at that moment, the Surfer's feeling of faintness lifts. Addressing him as "wanderer," Shalla-Bal says that she is not certain that she is truly the woman that the Surfer loved because she has no memory of anything before she became Doom's bride. It is a marriage in name only, she continues, but Doom will not release her to go with the Surfer until the Fantastic Four are destroyed. Because the Surfer had been confined to Earth by Galactus, he had been tormented by the thought that Shalla-Bal was separated from him forever, exiled to his distant home world. Now, having against all odds found her on Earth, he is glad that he never managed to escape.

Then she addresses him by his real name, Norrin Radd. She could not know his true name unless she was indeed Shalla-Bal, says the Surfer joyfully. Her suppressed memories must be closer to the surface of her mind than Doom supposes. Perhaps when she touched him, he says, a portion of the bond between them was restored. Then she embraces and kisses him, saying that this should restore much more of her memory. Meanwhile, the Fantastic Four enter a tunnel in Doom's castle. Using the Torch's flame for illumination, they walk down it until they come to a stone wall. Ben tries to break the wall down, but it is impervious, and suddenly another wall slams down behind them and starts to close in on them. Ben tries to hold it back while Johnny attempts to melt out of the trap, but all the walls are fireproof. Then Reed finds a thin crevice between the stones through which he squeezes his elastic body and escapes. As the wall closes in, Reed's three companions wait anxiously for him to stop the mechanism, which he does. Then a side wall slides up, and they find him in an adjoining chamber holding two guards wrapped up in his arm. When Ben asks what kept him, Reed replies that he had a little trouble getting his shape back. Ben wants to force the two guards to tell them Doom's plan, but Reed says that would be futile because Doom never tells his underlings his stratagems. 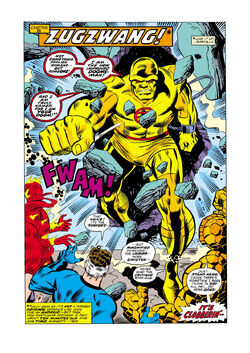 Chapter II: Zugzwang!
Suddenly the wall next to Johnny starts to glow, and the second Doomsman crashes through. Reed remarks that the creature's voice sounds like the Silver Surfer's, only more sinister. Ben tells Reed to stand aside and attacks, but the Doomsman knocks Ben aside like a toy. The Doomsman says that he does indeed possess the power of the Sliver Surfer, but his body is larger, so he has more force than the Surfer. The Surfer would not strike to kill, continues the android, but he has no such qualms. Raising his fist, he tells them to prepare to perish. Shalla-Bal suddenly shrinks away from the Silver Surfer after kissing him, saying that she is not who he thinks she is. Her lost memory has returned, she says, and she now knows that she is not Shalla-Bal but a Latverian peasant girl named Helena, who has lived her entire life in obscurity until a few days ago, when Doom discovered her. Doom ordered her to his castle, placed her under a machine, and altered her memory. This was all part of Doom's scheme to compel the Silver Surfer to kill the Fantastic Four. Just then, Doom's henchman, Daedalus, enters, his pistol leveled at the Surfer and the woman. Daedalus fires, but the Surfer easily absorbs the bullets, and with a small blast of cosmic power, he knocks Daedalus unconscious. The Surfer does not know how Shalla-Bal—or Helena—learned his real name, but he cannot stop to think about it when the lives of the Fantastic Four are in danger.

Summoning up his surfboard, he flashes away. The battle between the Fantastic Four and the second Doomsman continues, and it is all they can do to keep from being killed. Johnny attacks with flame-bolts, but the Doomsman knocks him to the ground with eye-beams. Just as things look bleakest, the Surfer soars into the chamber. The Android commands the Surfer to leave, but the Surfer replies with a bolt of cosmic power. The combined onslaught of the Surfer and the Fantastic Four forces the Doomsman against a wall, and then he crashes through and falls to the floor, inert. Behind the wall, however, is Doom's control chamber, and when Ben sees the Latverian monarch, he prepares to charge. Johnny flies too close to Doom, and a finger-blast knocks him out of the air. As Shalla-Bal runs into the room, Ben starts pounding on Doom's armor, but Doom gloats that he has made many improvements in his costume, and it would now take an atomic bomb to break through the force field that surrounds him. The Surfer agrees to halt the battle as they must not allow the destruction of a nation's legacy, even though Doom himself might not care. Ben remarks that the castle had been destroyed and was rebuilt, but Shalla-Bal replies that artifacts from all over the kingdom were brought there afterward—paintings, statuary, and other irreplaceable things. Reed asks Doom to call it a stalemate, and Doom agrees. Now that his Doomsman is irrevocably demolished, the game is ruined for him. As the Fantastic Four, the Silver Surfer, and Shalla-Bal depart, Doom walks away feeling cheated as if he had somehow lost control of events.

He was never in control, gloats a figure in an alien dimension observing Doom's discomfiture. How can a mere mortal ever hope to govern events, he asks, while Mephisto sits on his throne in the netherworld, playing with men like marionettes? Then Mephisto explains to his sycophantic minions that he hates the Silver Surfer more than anyone else. This day, he continues proudly, he has wreaked a most terrible revenge on him. When one of Mephisto's demons points out that the Surfer seems to be leaving the scene of battle unharmed, Mephisto replies that that is the ultimate beauty of his deviltry. The woman in Latveria, whom the Surfer first thought to be Shalla-Bal, and who he learned is a peasant girl, really is Shalla-Bal after all, although she herself does not know it. When Mephisto banished her, he did not send her back to her native planet, Zenn-La, but to Latveria, where he gave her a new memory. Thus the Surfer will strive desperately to rejoin his love, not suspecting that she is on the Earth after all. When the Surfer removed the girl's memory of being Shalla-Bal, he simply peeled away one false layer to encounter a second, but he never reached the third, of which not even Doom knows. Mephisto says that he allowed her to speak the Surfer's real name to tantalize him and increase his agony. And thus the Surfer, Shalla-Bal, and the Fantastic Four all go their separate ways, quite ignorant of who was really behind it all.

A flashback in this story affects the chronology of the following characters: