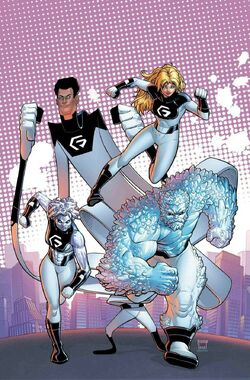 The Fantastix were a newly created team consisting of 2-D, Hope, Iceberg, and Ms. Fantastix who were formerly members of the team the Liberteens. They were able to obtain ownership of the Baxter Building to use as their headquarters, and they hired Brenda Bannicheck as their manager and publicist.

Their first mission consisted of stopping the Wrecking Crew from robbing Wilkinson's & Sons Jewelry. The team later learned that Brenda Bannicheck had actually staged the whole situation in order to get the team publicity, resulting in Bannicheck getting fired. Despite the return of the Fantastic Four, the Fantastix were allowed to remain the owners of the Baxter Building.[1]

Retrieved from "https://marvel.fandom.com/wiki/Fantastix_(Earth-616)?oldid=5758066"
Community content is available under CC-BY-SA unless otherwise noted.