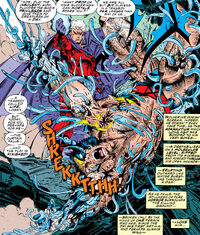 The Acolytes, now led by Fabian Cortez, attack Camp Hayden, the headquarters for Project: Wideawake, the latest government Sentinel program. The base is defended by government-sponsored mutant team X-Factor, and as the battle rages Cortez makes an offer to Quicksilver to be the Acolyte's new leader, accepting his role as Magneto's heir. The Acolytes leave after Quicksilver strongly declines.

X-Force is approached by the mutant Exodus, who brings an offer of sanctuary from an unknown greater power. It is revealed that the "sanctuary" (which is referred to as Avalon) is in fact Cable's former base of operations Graymalkin (now retrofitted with Shiar technology), and the "greater power" to be the mutant Magneto, who was presumed dead after the fall of Asteroid M. Cable teleports X-Force away from Avalon using the station's bodyslide technology, while he retrieves the sentient computer program Professor from the central core and activates the auto-destruct function. However, he is only successful in the former objective, as Magneto prevents him from fulfilling the latter, and Cable very nearly loses his life in a lopsided battle before teleporting himself out. The mutants Rusty and Skids, who were cured of their brainwashing at Stryfe's hands by Magneto, elect to stay aboard Avalon.

While the X-Men are burying Illyana Rasputin (Magik), who was killed by the Legacy Virus, Magneto and the Acolytes crash the funeral, stating their intentions to wipe out humanity from Avalon, their space station. Colossus, distraught over his sister's death and faltering in his faith in Professor X and his dream, joins Magneto and the Acolytes.

Magneto unleashes an electromagnetic pulse on the Earth that creates havoc on the world's electrical systems. Professor X dons a Shi'ar exoskeleton that enables him to walk, and assembles Jean Grey, Gambit, Rogue, Quicksilver and Wolverine to go to Avalon and stop Magneto. Arriving via Shi'ar teleportation device, the team boards Avalon and disables the station with a virus created by Beast. Magneto engages the X-Men in battle, and in a fit of rage after nearly being gutted by Wolverine, tears the adamantium out of Wolverine's skeleton. Professor X, enraged by Magneto's actions, mindwipes Magneto, leaving him in a coma. The X-Men race back to Earth to treat Wolverine, while Colossus stays in a devastated Avalon to care for the comatose Magneto.

As the Blackbird returns to Earth, it runs into rough turbulence. Flashes of Wolverine's consciousness are shown as he struggles to stay alive. The X-Men on Earth watch in horror as the crew frantically tries to stabilize the ship and care for Wolverine. The ship's hatch opens, and Wolverine sees himself "going towards the light", but he is pushed back. He awakens in time to prevent Jean Grey from getting sucked out of the Blackbird. The X-Men land on the Earth safely. As Wolverine recovers from his injuries, he and the X-Men learn that his claws were a part of his actual skeletal structure all along, as he now possesses claws made of bone.

On Muir Island, the X-Men use Shadowcat to lure in Colossus in an effort to heal his head wound (caused by the X-Cutioner), which they believed was responsible for his defection. The ruse works, and while Nightcrawler fends off the Acolytes' attempts to reclaim their ally, Professor X and Moira MacTaggert heal Colossus, using Cyclops' optic blast. Once again able to return to his human form, Colossus still elects to remain amongst the Acolytes, to keep them in check. 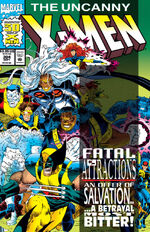 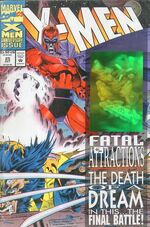 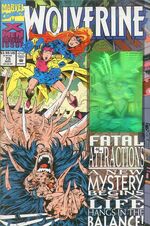 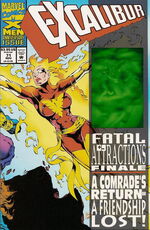