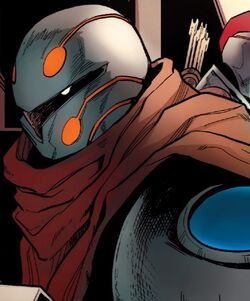 Father Diablo is a priest from Planet X and a member of Mister Knife's Slaughter Squad. Along his teammates, he invaded Kymellia III to steal the Black Vortex. After many battles against the Kymellians, he used his body that is made of smoke to lift a globe to open the way to the Unseen Chamber, where the Black Vortex awaited.[1]

He later had his cosmic potential unleashed by the Black Vortex.[2]

Gaseous Form: Father Diablo can turn himself into a black gas-like form.[1]

Like this? Let us know!
Retrieved from "https://marvel.fandom.com/wiki/Father_Diablo_(Earth-616)?oldid=5608423"
Community content is available under CC-BY-SA unless otherwise noted.