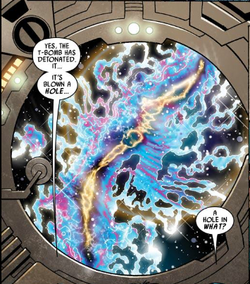 The Fault is a rift in the space-time continuum in Subsector 43 of the Shi'ar Galaxy in the Prime Marvel Universe,[1] that has exposed it to alternate universes, primarily the Cancerverse.[2] It was created from the combined energies unleashed in the battle between Black Bolt and Vulcan,[3] and was stabilized by the Guardians of the Galaxy to prevent it from expanding.[4]

In the end, the killing of Lord Mar-Vell by Death created a massively-powerful exotic energy detonation that caused the Fault to begin collapsing in on itself. The forces from the Cancerverse that had invaded the Prime Marvel Universe were either disintegrated or sucked back into the Fault. Within a matter of minutes the Fault had collapsed and been sealed forever.[5]

Like this? Let us know!
Retrieved from "https://marvel.fandom.com/wiki/Fault?oldid=6432115"
Community content is available under CC-BY-SA unless otherwise noted.