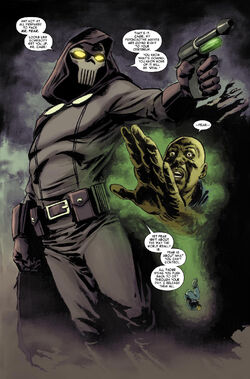 Mister Fear uses compounds based on pheromones, chemicals produced by most animals, used to communicate a variety of simple messages over distances. The particular pheromone he uses is the flight-scent pheromone, which stimulates fear reactions in herd animals. This drug, tailored for human beings, whose reactions to pheromones are not completely understood, induces severe anxiety, fear, and panic in his victims, rendering them incapable of fighting or resisting his will. The drug is most commonly used in the form of gas pellets shot from a gun. The pellets rupture on contact, releasing the flight scent, which is inhaled by the victim. The dosage contained in one pellet is enough to incapacitate a normal adult male for about 15 minutes, or an exceptionally fit male, such as Daredevil, for about five minutes. The side effects of anxiety, edginess, and mild nausea can persist for several days.[1]

Chronic exposure to his various chemicals has resulted in Alan Fagan (Mister Fear IV) having an accumulation of fear drug within his skin. Though he has not proven able to utilize this himself, samples of his skin were used by Ariel Tremmore to gain superhuman powers as Shock.[2] Larry Cranston, the third Mister Fear, DID develop the ability to manipulate fear personally as a result of exposure to his chemicals.[3]

Like this? Let us know!
Retrieved from "https://marvel.fandom.com/wiki/Fear_Gas?oldid=6429374"
Community content is available under CC-BY-SA unless otherwise noted.