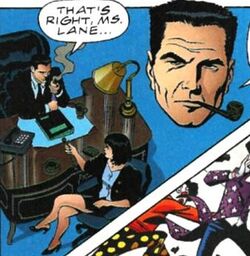 The F.I.B. seemingly had a similar history as its Earth-616 counterpart.

Hulk captured F.B.I. targets, the Circus of Crime, and his ally, Rick Jones, turned them into the bureau. They were later interviewed on the event by reporter Lois Lane.[4]

They figured out that Cass Rimer had broken into the Pentagon and stolen a primer that could light water on fire, but couldn't locate him.[2]

Desperate to capture mobster Red Fever, the F.B.I. hired Punisher to capture him in exchange for Fever's information on the criminals on the eastern seaboard. When the chase entered Riverdale, they informed local authorities of their deal with Castle. Scooter, a rival criminal, turned himself in after watching Punisher in action and gave them the information they hoped to acquire from Jay. They called Frank and informed him that they no longer needed Red Fever alive.[3]

Kingpin turned in all the information he had gathered on the League of Assassins to the FBI.[1]

Retrieved from "https://marvel.fandom.com/wiki/Federal_Bureau_of_Investigation_(Earth-7642)?oldid=5546833"
Community content is available under CC-BY-SA unless otherwise noted.