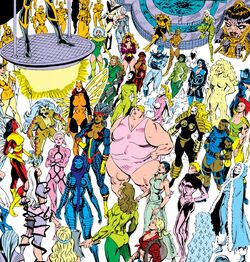 The Femizons were mainly enemies of Captain America, and their goal was to conquer Earth and create a utopia where women ruled over men. Led by Superia, the group was composed of several established female criminals and super villainesses.[1]

Like this? Let us know!
Retrieved from "https://marvel.fandom.com/wiki/Femizons_(Earth-616)?oldid=6463727"
Community content is available under CC-BY-SA unless otherwise noted.