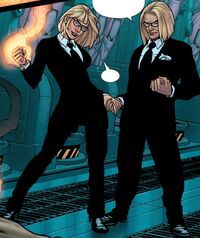 Andrea and Andreas von Strucker are co-presidents of Fenris International, a global investment firm. The Struckers are two androgynous German mutant business tycoons who seek mutant supremacy through economic control. Although they claim their motives are honorable, they are deeply involved in corporate crime. It was shown that they are both siblings and lovers. While touching each other, they can generate electrical discharges and disintegration beams.They have dealings with a thus-far unseen Black Tom Cassidy, and have tried to recruit Gambit and Rogue; however, Rogue rejected the offer and Gambit, who was already in their employ, rebelled to help her escape.[1]

Later, it is revealed that the Fenris twins are behind the recent Sentinel attacks, along with Bolivar Trask, the creator of the first wave of Sentinels. It was also revealed their connection with the Mutant Liberation Front. As a result of their actions, Bishop apparently killed the twins during their battle with the Bishop's team.[2]

Retrieved from "https://marvel.fandom.com/wiki/Fenris_(Earth-1610)?oldid=5546847"
Community content is available under CC-BY-SA unless otherwise noted.