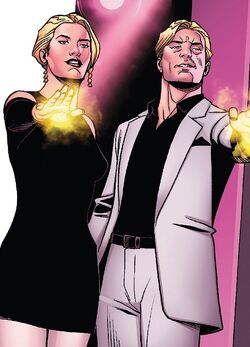 The Strucker Twins Andreas von Strucker and Andrea von Strucker were the children of Nazi supremacist Baron Wolfgang von Strucker, who saw great potential in their future.[3] While still in-utero, the children were bio-engineered by Dr. Arnim Zola to have superpowers, using the X-Gene with each gaining the ability to fly and fire beams of concentrated plasma as long as they were in physical contact, usually accomplished by holding hands.[2]

Now known as the Fenris Twins, like their father, the twins are white supremacists, have great sympathy for the Nazi agenda, and strive for the Fourth Reich. The two came into conflict with the X-Men. While on safari, Storm interrupted Andreas' attempted assault on a native woman in Africa.[4] Andrea retaliated for Storm's humiliation of her brother by shooting her in the head and leaving her to die.[5]

The Strucker twins despise Magneto for his role in their father's seeming death some years after World War II. They conducted acts of terrorism and finally attacked Magneto during his trial in Paris by the International Court of Justice for his crimes against humanity. The X-Men foiled their assassination attempt, but Fenris managed to escape by allowing themselves to be swept into the old city sewers.[6]

The twins joined the Assembly of Evil. The Assembly confronted a small contingent of Avengers who were holding a press conference regarding the "Acts of Vengeance."[7] The Avengers defeated the Assembly with the help of Cloak and Dagger, who had only agreed to join the villains so they could foil their plans. The Assembly was remanded to custody and the various members have never since banded together again.[8]

At a certain point, the twins were informed by Moira MacTaggert (possessed by the Shadow King) that Forge and Banshee wanted to search and reunite the defunct X-Men. They explode their plane, injuring only the pilot, Cylla Markham, later recruited by Donald Pierce. Fenris living in Madripoor met with Matsu'o Tsurayaba, the new leader of the Hand. Black Widow was sent to investigate the meeting taking place on a yacht docked at the harbor. Working with Wolverine they infiltrated the yacht and take out the gangsters, but find out they are impostors: the real meeting took place somewhere else in the meantime.[9]

The twins traveled to the UK where they blackmailed Mesmero into using his powers for them. He took control of Excalibur to attack Fenris. Kitty Pryde was training as a cheerleader close by and left in the middle of the routine to help her team. After some debating, the other girls decided to help and used their hockey sticks that take out Fenris.[10]

The twins joined a conference of powerful criminal leaders who intended to divide up the empire left by the fallen Kingpin.[11] Among the members of the conference were Slug, Hammerhead, Tombstone and their sibling Werner von Strucker. The twins did not believe Werner was actually their sibling.[12] This, and other arguments, caused the conference to degenerate into a shouting, shooting and blasting match. Fenris attempted to kill Hammerhead but he was rescued. Their sibling is soon after killed by their father, who had attended the conference disguised as the assistant to Werner.[13]

They would later join of group of mutant millionaire supervillains known as the Upstarts, led by the telepathic Gamesmaster, until they were defeated by X-Factor.[14] The twins tried to acquire Omega Red for the Upstarts but failed.[15] At the end of the Upstarts competition, The twins ultimately met their match when they tried to kill Wolfsbane, the former New Mutant. Along with her new X-Factor teammates, Wolfsbane easily beat the twins.[16] But resurfaced against X-Force.[17]

Fenris joined a group of villains as they battled the Canadian superhero team Alpha Flight.[18] Still on the hunt for Magneto the team's search leads them into confrontation with Generation X.[19] They find Magneto's son Quicksilver and plan to kill him in a revenge attempt against Magneto.[20]

On Hydra Island, Andrea was bored with the peaceful island and wish for some excitement. This changed when Kraken came to visit. The Strucker twins reacted and joined forces, only for their father to stop them, stating that Kraken is an old friend.[21]

Jean-Luc sent his foster son, Gambit in Leipzig, famous archaeologist Sekmeht Conoway and Fenris, also hunted for the Momentary Princess, but while they all fought, the Princess disappeared again.[22]

The twins resurfaced where they were seen working with their father Baron Wolfgang Von Strucker. They fought Citizen V, though Andrea discovers that he is actually Baron Helmut Zemo.[23] Having been decapitated by Scourge under orders of Henry Peter Gyrich, Zemo had survived when Techno, to Zemo's own surprise, transferred Zemo's mind into the comatose body of the second Citizen V, John Watkins III. Zemo quickly killed Andrea to keep her from telling anyone his secret.[24]

After Andrea's death, Andreas became the fourth Swordsman and joined the New Thunderbolts. By tanning his sister's skin and using it as the grip on his sword, he was able to maintain the powers he shared with her as a part of Fenris.[25] A clone of Andrea created by Arnim Zola and commissioned by her brother. This allowed him to regain his full powers.[26]

Several years later, the twins returned to the world of the living and opened a club for villains named the Club Fenris. When questioned about their demise, the siblings had stated that their father "took care of that."[27]

Like this? Let us know!
Retrieved from "https://marvel.fandom.com/wiki/Fenris_(Earth-616)?oldid=6306987"
Community content is available under CC-BY-SA unless otherwise noted.