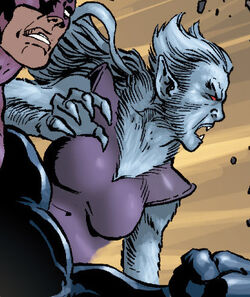 Fera was a wolf native to K'un-Lun, a pocket dimension that connects with Earth in the Himalayas of Tibet every 10 years. She was born to a pack of wolves and rose to the role of pack leader.[1]

Encounter of the Rands

One day the portal opened to Earth and the pack went out to hunt. They encountered Heather Rand while she and her son Danny Rand approached the lost city of K'un-Lun. The Rands reached the Bridge of Destiny, but the wolves were right behind them. Heather threw herself at the wolves while Danny was escorted to the hidden city.[1]

Fera was granted a semi-human shape by the sorcerer Master Khan, and he took control of her with the Amulet of Shirrair. She later tore off the amulet and freed herself while Khan was in battle with Iron Fist and Luke Cage.[2]

Later she joined with the Femizons lead by Superia. After being thwarted by Captain America, the Femizons disbanded.[3]

Fera was summoned to Starkesboro by Dredmund Cromwell who was using the Godstone. Dredmund's aide Moonhunter captured Fera and placed her into his group of servants whom he called his "Moonchildren" and "Night Patrol." Fera escaped only to attack Captain America and Dr. Druid who were searching for John Jameson, the Man-Wolf. After Captain America and his allies stopped Dredmund, Ferocia escaped capture.[4]

Fera was one of the super-criminals who had received synthesized Skrull organ implants from the Corporation, granting her shape-shifting powers that allowed her to evade the Superhuman Registration Act (SHRA). In exchange for this, Fera and her companions Blue Streak, Flame, and Kingsize were assigned to break out Ricadonna from prison, but the Heroes for Hire apprehended the criminals.[5]

At some point, Fera was held as an inmate of Pleasant Hill.[6]

She later joined the Army of Evil.[7]

Like this? Let us know!
Retrieved from "https://marvel.fandom.com/wiki/Fera_(Earth-616)?oldid=6478612"
Community content is available under CC-BY-SA unless otherwise noted.