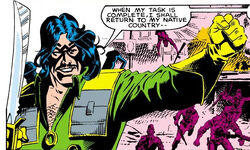 Ferdinand Lopez was a revolutionary in his native South American country of San Diablo, but he could not manage to organize a successful revolution. He began working as an international mercenary to get the money for his revolution, considering himself "El Liberador de San Diablo." He joined Batroc's Brigade and Doom's Brigade as a means towards that goal. This led him to fight Captain America and other superheroes.[1]

Multilingual: Machete is fluent in Spanish and English.

Expert Marksman: Machete is a expert in fighting with knives. His skill is so great, that he managed a trick-shot throw that destroyed the only vulnerable part of Captain America's shield to conventional weapons, its holding straps, while Cap was wielding it. [1]

Machete possesses the normal human strength of a man of his age, height, and build who engages in extensive regular exercise.

Machete has electromagnets in the palms of his gloves to attract a close target weighing 200 pounds or less.

Like this? Let us know!
Retrieved from "https://marvel.fandom.com/wiki/Ferdinand_Lopez_(Earth-616)?oldid=6471221"
Community content is available under CC-BY-SA unless otherwise noted.