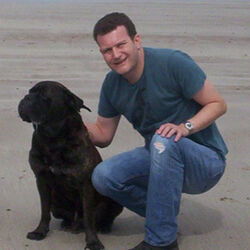 Ferg Handley was born in Chichester, Sussex but moved to Scotland as a child and has lived there ever since. He has been a comics fan for most of his life.

After studying comics writing at the Cartoon Art Trust in London, Ferg broke into the industry writing scripts for publishers DC Thomson's long running war digest Commando, and has since become one of their most prolific scripters with more than 250 issues under his belt. He has also written numerous scripts for Panini's Marvel UK line, including the titles Marvel Heroes and Spectacular Spider-Man.

Like this? Let us know!
Retrieved from "https://marvel.fandom.com/wiki/Ferg_Handley?oldid=6836844"
Community content is available under CC-BY-SA unless otherwise noted.