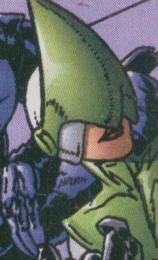 Fern is a member of the Cherubim, which is a group of Warpies who were being used by the R.C.X.. R.C.X. head Peter intended for them to be trained to become a superhuman army.

Fearing for the safety of their charges if the plans of their superior went ahead, several R.C.X. agents, led by Agents Michael, Gabriel and Raphael, spirited the children away from the abandoned prison the agency was housing the Warpies at.

They took them to Braddock Manor to enlist the aid of Captain Britain, figuring that he could lend them much needed protection, both physical and politically. However, the agents' decision to not fully inform the hero of their situation meant he was reluctant to help, and while they argued, the Cherubim were released from their van by Meggan.[1]

They fought Captain Britain and his allies, Betsy Braddock and Captain UK, but were swiftly overpowered and the Cherub Whirlwind was killed. In the confusion afterwards the Cherubim went rogue and the other Warpies moved into Braddock Manor. [2]

The Cherubim soon found themselves in London hoping to find a place for themselves there. However, what the found instead was another group of Warpies known as the Parasites led by Uncle Lex. Uncle Lex sought to use the Warpies for his own purposes including petty thievery. [3]

The Cherubim eventually parted company with the Parasites when one of their members, Snap was killed by a bus. The Cherubim was appalled by the lack of concern by the Parasites for their fallen comrade they decided to leave. Uncle Lex refused to let them go and after a brief confrontation with them, the Cherubim departed their company. [4]

At some point after this, the Cherubim once again became members of the R.C.X. and went to live at Cloud Nine under the direct supervision of Agent Peter, who sent them out to capture Captain Britain and Meggan and bring them to him at Cloud Nine.[5]

However many of them, including Fern, were subsequently kidnapped from R.C.X.'s custody by the black ops agency Black Air, who tortured and experimented on them.[6]

Though they were reported to have died, in fact the computer Mastermind rescued at least some, Quill among them. Having been reprogrammed by Kang the Conqueror, Mastermind led the newly-armored Warpies to invade Otherworld, slaying many of the Captain Britain Corps which defended it. Once again Quill and his cohorts came into conflict with Captain Britain, who finally used the power of the Sword of Might to transform them back into normal humans. [7]

Currently none, all of the Warpies were depowered by Captain Britain on Otherworld using the Sword of Might. [6]

Like this? Let us know!
Retrieved from "https://marvel.fandom.com/wiki/Fern_(Earth-616)?oldid=6420171"
Community content is available under CC-BY-SA unless otherwise noted.